Who the hell is Solidthought?

Until the age of 17 I played football pretty much every day. This came at the expense of homework. So, I never did my homework but on the plus side, I did get very good at football. When I became 18 I started to realise that I wasn't going to become a professional footballer. I got scouted once or twice but it never amounted to anything. This was disappointing to say the least. I went from knowing pretty much *everything* about football, spending all my time either playing it or on Football Manager - learning about the latest hot prospects that my scouts had found playing in Scandinavia - to becoming very disillusioned with football in general. I stopped following it totally, and now I can barely name a player that still plays. If something vaguely round is at my feet, I will probably try and kick it, and I can still do a "round the world" but unfortunately I no longer cheer on football teams or players like I used to.

I started college and quickly found something else to do. Play guitar. I now had lots of time on my hands without playing football all the time. So I taught myself how to play the guitar. By the time I was at uni I was probably playing 5 hours a day in my room. I still love playing the guitar and am very passionate about music. I could never find a band though, which meant, I probably wasn't going become a rock star. Shame really.

During my 1st year at uni I watched Casino Royale and immediately came home to play some online poker for the first time. This was pretty big.

Maybe the signs were already there though? 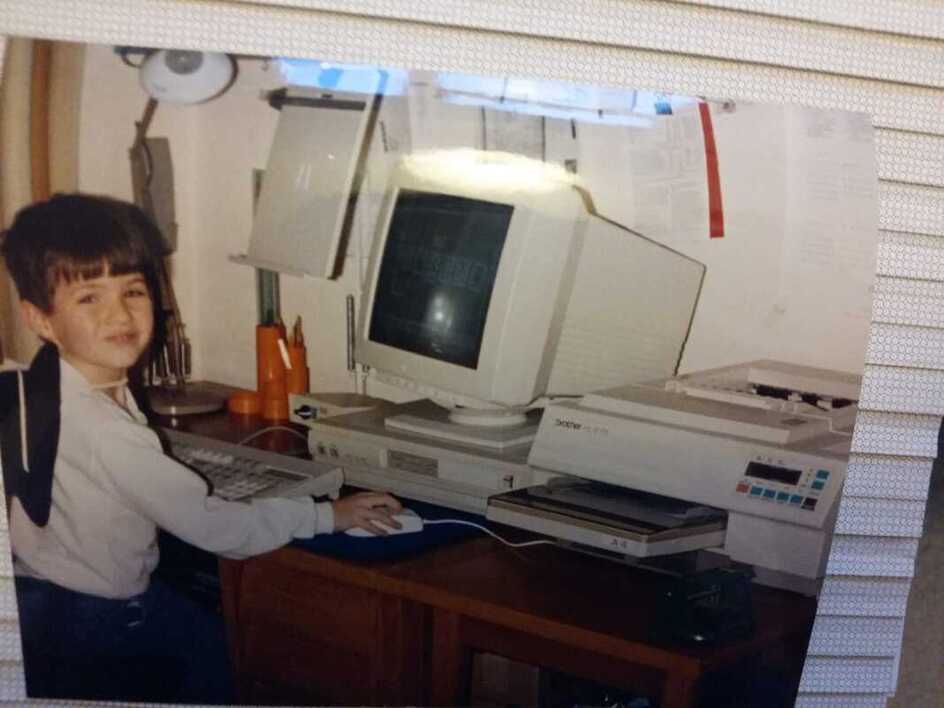 This is me as a small human in my Dad's office on his computer. If you look carefully at the computer screen you can see I was already trying to make a straight, even then!
Since getting interested in poker, it quickly became a massive part of my life. I graduated from the University of Plymouth with a 2-1 in Economics and have been playing poker professionally, full time, ever since.

After spending the entire 3rd year of uni playing 25c SNGs - with a bankroll of $10 - I realised poker was just too much fun to do sporadically.

I have a peculiar affinity for deep stack tournaments. With a bankroll of still just $10, l deposited an extra $22 in order to play a $22 deepstack (with the flawed logic it was now a freeroll) he one tabled it to the final table and managed a score or around $100. Suddenly there was a $100 bankroll.

I moved to playing 1$ games and micro stakes MTTs. After a 2nd place finish in a large field $1 MTT I now had a $400 bankroll. At this point I, perhaps unwisely, moved up to the $5-7 SNGs and read Colin Moshman's SNG book. Looking back now, much of the book went over my head so I probably moved up a little quickly - but - it happens! After winning a 2$ rebuy for over $2000 I decided this was what I wanted to do. Moving to $7-15 SNGs I then began to put in more and more volume and at this point was lucky enough to begin working with "Bigstealer" who transformed my game.  Since then, I have been working hard to become as good a player as I possibly can.

When not at the tables, I like bro sessions at the gym, deadlifting, playing football, jamming out blues classics on my Steven Seagal Fender strat, watching arm-wrestling videos on YouTube, looking at maps, Google Earth and playing Age of Empires 2.
Optimising strengths, while simultaneously detecting and addressing weaknesses...